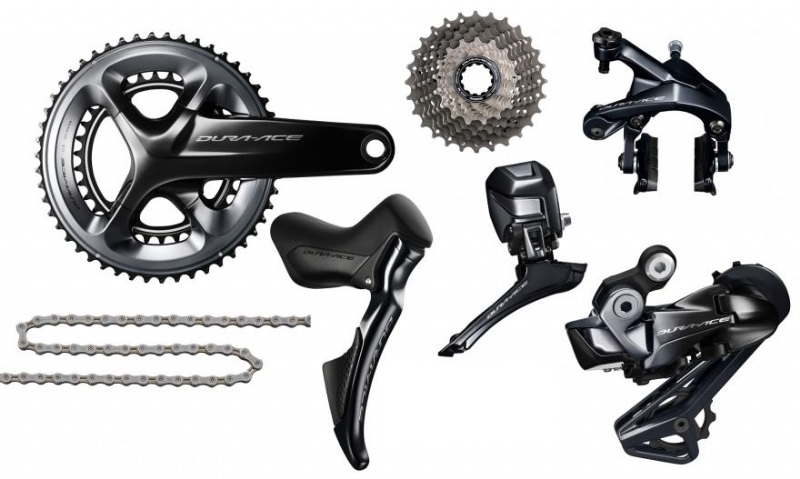 In terms of fundamental shifting performance, Shimano hasn’t broken any new ground with the latest Dura-Ace Di2 R9150 groupset, and there are no major changes in how Di2 goes about its core functions. After all, it’s difficult to imagine how much improvement could be made over the previous generation.

Just like prior Dura-Ace Di2 drivetrains, rider commands at the shifter are carried out at the derailleurs with flawless precision, each and every time, and without fail (barring exceptions like setup issues, crash damage, etc.). Rear downshifts are impeccably smooth, and individual rear upshifts are just as lightning-quick and consistent as before. Likewise, shifting between the two chainrings continues to be the best in the industry, hands down.

As before, the new Shimano Dura-Ace Di2 rear derailleur is utterly perfect in terms of how it shifts. Downshifts are impeccably smooth and quiet, and upshifts are fast and precise.

Based on extensive experience with previous Di2 editions, this latest R9150 groupset should laugh off torrential deluges of water, pressure washing, and merciless mud and muck, too: in other words, a wholly obedient robot in the form of a bicycle transmission.

But real-life robots aren’t like Rosie, that affable and witty housecleaning tin can from the Jetsons. Similarly, while Di2 has always been nearly flawless from a functional perspective, it’s also been a little lacking in personality.

TOUCH AND FEEL
Shimano’s biggest challenge in improving Dura-Ace Di2 has never been one of function, but rather user experience. From an interactive perspective, the buttons were lacking in feedback, and it wasn’t always as easy as it should have been to tell the buttons apart, especially while wearing full-fingered gloves or while riding on bumpy terrain.

Both of those quirks have been addressed with Dura-Ace Di2 R9150. The buttons now have more audible and tactile feedback when they’re pressed. There’s more of a differential texture than before, and they’re also longer, for better accessibility, from both the hoods and drops. The improvements are subtle rather than dramatic, but they’re still noticeable while riding — and most welcome. As is typical for Shimano road Di2 controls, the button throws are still ultra-short, and certainly shorter than either Campagnolo EPS or SRAM Red eTap. This is either a good or a bad thing, depending on rider preference.

More than four years after introducing its first set of hydraulic Di2 shifter/brake levers, Shimano has finally debuted a set the company feels is worthy of the Dura-Ace moniker. Thanks to some clever packaging, they are virtually identical in look, shape, and feel to the non-hydraulic levers.

Otherwise, it’s the new hydraulic brake-compatible levers that see the most radical upgrades. Shimano debuted its R785 Di2-compatible hydraulic levers in 2013, but withheld the “Dura-Ace” label because the company never felt they were totally up to the standards expected of the nameplate.

To that, I’d agree. The inexplicably long hoods often required a shorter stem than usual, they had an annoying tendency to rattle when riding on rough surfaces, and, frankly, the aesthetics weren’t quite right.

Despite the fact that a hydraulic brake lever requires more space than a cable-actuated lever, Shimano has done an impressive job of cramming all of the bits into nearly identical forms. You’d be hard-pressed to tell the two Dura-Ace Di2 R9170 lever versions apart now, and they’re undeniably elegant to behold. Shimano anticipates that its pro riders will switch between hydraulic disc brakes and cable actuated rim brakes throughout the season, and two days of riding in Calpe, Spain, confirmed that there’s almost no way for your hands to discern between them.

The updated body and cage geometry, borrowed from the standard 9100 mechanical transmission, means compatibility with 11-30T cassettes without having to switch to a longer pulley cage.

In either case, the body length has also been restored to more typical dimensions, and the nicely rounded, compact shape is comfortable to hold with a little extra security coming from the newly textured hoods.

Both versions also offer a generous 41mm of brake lever reach adjustment, in addition to “Free Stroke” adjustment on the hydraulic version — which adjusts how much the lever travels before the brake-caliper pistons begin to move.

More customization is provided by a few new remote shifter options, too. A split configuration (similar to the carryover sprinter remotes) means the new climbing buttons are more compact than before, easier to actuate, and with more flexibility in where they’re placed. The even-tinier sprint shifters are carried over from Dura-Ace 9070, but sadly, they still only work with the cable-actuated Di2 levers, despite the hydraulic levers now sporting an additional e-Tube wiring port per side as compared to R785.

Shimano has overhauled its associated Di2 app as well, which now offers even more